Our final camping adventure of the school year took students and their families through the majestic Georgia O’Keeffe landscape in Abiquiu, New Mexico, where our very own professional photographer, Marc Romanelli, introduced us to one of his favorite places on earth: Plaza Blanca, or The White Place.   The rapidly eroding landscape at Plaza Blanca is part of the Abiquiu Formation, which consists of re-deposited volcanic ash and other sedimentary rocks that are about 20 million years old – and seems to be Tent Rock’s northern cousin! After a short introduction and a bit of  history, Marc talked about the various aspects of lighting used in the composition of photography and challenged the group to pay attention to the sun’s location and the shadows in the landscape.  Armed with their own cameras, the students set off to create a photographic journal and personal interpretation of the hoodoos, spires and serpentine ridges of this magical place.

Following the hike and photo shoot, we all rendezvoused at the Riana Campground at Abiquiu Lake, to set up camp, relax,  share dinner and roast marshmallows around a campfire. However, by the time we arrived in late afternoon, dark rain shadowed clouds were sweeping across the Lake from the west whipped up by a solid 40 mile per hour wind! Several tents first creaked and groaned, then a pole or two snapped as each family rushed to their site to ‘batten down the hatches!’ We all thought for a moment that perhaps we would see a couple of the smaller folk  swirling up in the air Dorothy and Toto-like!   When all was secured, we gathered under the picnic shelter bundled up in every garment we’d brought as rain skittered on the metal roof above. Ahh…New Mexico spring weather!

Every so often the setting sun would burst from between the inky rain swollen clouds to illuminate one of the Southwest’s most beautiful lakes with a pure golden light that created a frenzy of activity lead by Marc as cameras popped from every pocket and tent! The white caps on the midnight blue water caught the last sparkles of the fading sun creating an almost dizzying effect as we all stared into the west, mesmerized by this landscape. Meanwhile, the students explored the juniper covered terrain, seemingly unhindered by the down right cold wind and short rain squalls, scampering down near the lake and onto small ridges. As darkness approached, the children gathered with all of us under the shelter and each family served up dinner amongst a constant din of laughing, talking and the metal enhanced sound of rain.

Bellies full, the students gathered fire wood, and with flint and igniter sat patiently trying to start a fire in the blustery wind. After a time, some paper towels and a storm proof match showed up to finish the job and sticks were quickly sharpened to receive the revered white cube of sugar that seems to make the entire trip extremely worthwhile! The fire, made within a large rock-ringed pit on a nice rocky promontory, sent brilliant orange sparks twisting and twirling into the black night sky. The now softer rain allowed us to watch, almost hypnotized, this cascade of orange specks corkscrew upwards and disappear! Several diehards, along with their kids, sat up wind of the fire chatting and smiling until the cold of this early spring storm pushed us not so gently into our tents and warm sleeping bags.

As if to make the trip even more transformative, rain periodically pelted the tent during the night reminding me of much more northern adventures in the Cascades or even Alaska.   And crawling out in the morning to the delicate smell of rain-soaked high desert plants and junipers, the sun low in the east jumping in and out of clouds, topped off nicely the outdoor batteries that all of us hoped would be recharged on this outing. 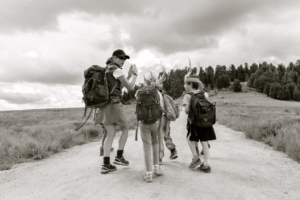 Email us at
admissions@JourneyMontessoriSchool.org
to RSVP